Ten years ago, Lawrence Clarke finished fourth in the 110m Hurdles at the London Olympic Games – an extraordinary rise for someone who only started the discipline in his late teens. We asked him what the key to his success was.

Still only 32 years-old, the double Olympian’s achievements stretch far and beyond sport. He graduated from Bristol University before undertaking a MSc at Bath all whilst competing internationally, ultimately pivoting into a career in Finance.

Two months after choosing to retire at just 26 years old, he made his final great ‘hurdle’ and landed on the Trading Floor at Citigroup from where he has gone on to head hedge fund multi-manager, and finance house, Duration Capital Solutions’ European business here in London.

Taking the moment to look back on his exceptional journey, Lawrence reflected on the moment he knew it was time to retire from elite sport, leveraging the soft skills he gained through athletics to reach new heights in the corporate world. For him, the desire to succeed and be the best in his field was the key driver in his career.

Despite never captaining a sports team as a youngster and coming to athletics in his late teens, Lawrence went on to compete with Olympic champions and earn several international medals.

“I was very fortunate off the bat – when I was leaving school (2008), I got essentially selected for one of the biggest international races with very little training which was the Commonwealth Youth Games and as a result of that I met Malcolm Arnold, OBE who trained the twice world record hurdler and British legend, Colin Jackson, CBE. It was like Bill Gates saying ‘you’re going to be my protégé, do everything I tell you and you will be able to run the top technology companies in the world’. It was exactly the same for me in hurdles, I had the top guy with the best pedigree as a coach and he said if you do everything I tell you, you’ll make the Olympic Games”, Lawrence appraises.

“Only then I realised I could run fast and can do something here. I used to think that starting so late was a disadvantage - most of my rivals started training when they were 10 - until I realised that if I’d started as young, I might have burnt out or, being so young, lacked the maturity and focus to stick with it.”

All or Nothing – A relentless Eagerness to Compete & Succeed

For Lawrence, the Olympic Games was the pinnacle of sporting achievement and his ultimate goal in competing in sport. Nothing else ever really mattered. The four-year timeline helped him to focus and rationalize all the hard effort he put into his training. The races along the way were important but only seen as a steppingstone to the Olympic Games.

“I loved the competition, I hated the training. Getting to the top was worth all those hard years of training, as I would occasionally collapse, and often be sick in training. I often could not open my car door after training because of the amount of weight training I had done! I didn’t really enjoy the whole process of pushing myself to the absolute physical limit, but I really enjoy being in the environment knowing that I was fitter, stronger, faster than the people around me”, he shares.

Lawrence never wanted to be off the pace. He needs to evolve in an environment in which he can continually hit performance targets. As soon as he figured that his athletic performance was not at his peak anymore, he knew it was time to move on; “I’ve set various performance metrics to achieve in order to get continuance within my sport, for me to say it is worthwhile in terms of the opportunity-cost. The Rio Olympics’ final in 2016 was for me the waypoint that I had to get to, and I did not make that, I came 11th, I knew then that it was time”, he remembers.

Lawrence retired at 26 quickly and quietly. Within two months, he entered the sector he had always been interested in, Finance, and was placed at Citigroup through the assistance of add-victor. 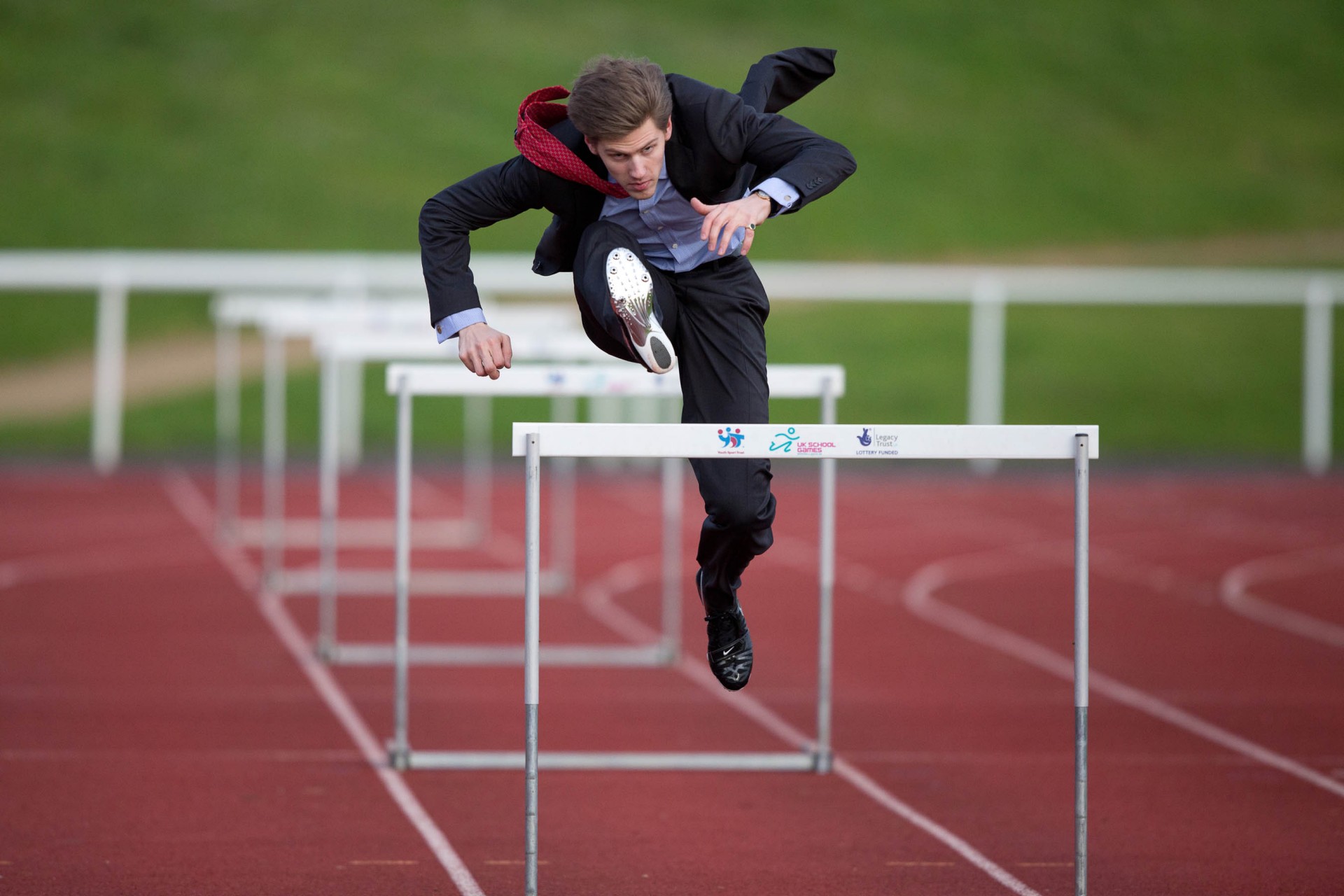 The Three Most Transferable Skills for Working in Finance

Over the past decade, Lawrence has successfully changed his career and lifestyle and fully appreciates  how the power of transferable skills, developed through competing in elite sport, have empowered him in the corporate world.

Athletics and Finance share remarkable similarities in terms of focus, grit, and attention to detail. Athletes have a structured and methodical approach to their Sport, they understand where to spend their time and energy to yield optimal results. According to Lawrence, the individuals who truly succeed in their careers are the ones who have the following three skills in abundance:

“For most athletes, it takes 8 years to make the Olympic Games if they make it, but realistically it’s a 4-year cycle, and within that, you have the Commonwealth Games, the European Championship, the World Championships… and you have to be able to set the goals that will get you to the Olympics.”

“The ability to take multi-year goals is a key asset. When I was at Citigroup, I began on the trading floor and was surrounded by people who are hot-headed and quite fast to act. The ability to focus, understand what you’re trying to achieve, and not get flustered by it is vital. […] Being used to view my life in 4-year cycles also helps me to be confident knowing that after a few years gaining experience in Finance, I would come out in a very strong position.”

“In sports, you have to keep your longer-term goals in mind, particularly when you have injuries or haven’t managed to perform at the level you were aiming for. I’ll give you an example; in 2014, I ran in the Commonwealth Games in Glasgow, I made the final and I ran absolutely terribly. Two weeks later I had the European championship, I had been under quite a lot of pressure, and unfortunately, I torn my hamstring. I hadn’t done the work and been strong enough, I had to completely reevaluate everything I was doing. I had to recentralize and put myself in a position where I can actually succeed again. This ability to recalibrate to an extent that I was able to raise my game considerably is absolutely vital and unique to athletes.

“Perseverance is incredibly relevant to the business world, particularly in today’s economic environment where people are genuinely under a lot of strains across a lot of industries. In finance, if you lose a deal, you need to recentralize and not lose your confidence.”

“Being able to keep composure under pressure is I think the most transferrable skill in life. You need to be able to, in any environment that may cause you stress, turn it into a strength. Sports is the perfect training ground from a mental standpoint because you understand how to take calculated risks, how to deal with high-pressure environments. I had training where I thought I would never be able to get up again, and you get up and run faster! I had been told if you run this race, you might not run again, and you run and won a Championship medal!”

“The existential threat that goes in athletics is far greater than it is in the working environment. Sport is a confidence game – if you’re not competing well enough you are out of it, one because you can lose sponsorships, two because can’t get into races. If you take athletics, you’re constantly one injury or race away from the end of your career, you’re always in that fine line between training and the possibility to get injured and potentially not being able to compete internationally ever again!”

“The maturity sports give you by knowing how far you can push yourself is very helpful to know. We can’t really say to a trader if you missed this trade and you get it wrong, you will never work in finance ever again but our [the athletes] real experience of it is extremely valuable! Our sense of calculating risk is ingrained in us. We have the ability to bounce back, reset our minds, and hold our own in high-pressure environments. […] I also learnt to be in the public eye, to communicate and carry myself well, which served me well at work because it is exceptionally client-facing.”

Lawrence acknowledges how transitioning out of sports can be difficult for so many athletes, especially when faced with the unease of knowing what to throw themselves into next: “first, you need to know what you want to do and secondly, you need to have a partner who can help you get there. I had both. add-victor gave me the guidance and connection points that I didn’t have in the industry, as well as enabled me with the ability to get in front of the right people and present my skills when I didn’t have the work experience that banks traditionally look for.”

Lawrence has always fully embraced his transition and new life, pursuing what he is passionate about: “I always wanted to go into Finance, I’ve always been interested in global markets and the flow of global trade. My transition has probably been more worthwhile to me than my athletics time, as it has given me a deep interest in something I will have for the rest of my life [Finance]”.

Looking at Lawrence’s flourishing route, banks’ training programmes seems to be the best training ground for those wanted to enter the world of Finance. The opportunity to get involved in different areas, work with people in different is effectively the best way to build a solid a network which you can then take advantage of for a lifetime. As a conclusion and remembering his first experience in the industry, Lawrence reiterates the importance of how being in a field you are passionate about is what perpetually drives him forward: “Citigroup was one of the best environments imaginable in terms of people, collaboration, dealing with individuals from all around the globe, with different backgrounds and skillsets,… It’s what makes life interesting, isn’t it?!”