Marcus Mepstead – Fencing, New York and being the only British Fencer at this summer’s Olympic Games

Marcus Mepstead is the number one ranked British fencer and the sole representative of Great Britain for fencing in the upcoming Tokyo Olympics. A turbulent decade has seen him reach the highest of highs alongside some low lows. As the Olympics approach, we caught up with Marcus to discuss his life as a professional athlete.

After walking past his school’s sports hall and seeing others practicing fencing, a young Marcus asked his mum if he could go along and see what it was all about. “I’ve got two brothers and my mum just chucked us into it,” he said. “It was reason for us to be out of the house and not messing it up!” Being so young there was still a childish side to Marcus in his early time fencing. “If you give an eight-year-old a sword he’s just going to run around stabbing people with it! Once I had got over the running around like a madman phase I started fighting a bit more, they [the coaches] were like he’s good and seems to know what he is doing.” From there, Marcus continued to excel, competing internationally and being within a shot of being selected for the London 2012 Olympics. “I missed out on London, and it was really hard for me, even though I now look back and I know I wasn’t good enough at that point,” Marcus said. “It took me a long time to recover from that, but it gave me a fight and a fire to push through.” A bittersweet moment in 2016 followed when Marcus was picked for the team event. “I really wanted to compete individually, but once I got started, I knew I was good enough to compete at this level.” However, following the Olympics in Rio, British fencing lost its funding and left Marcus and the rest of the team in limbo. “It was really difficult in that period,” he said. “I turned down quite a few jobs in finance and chose to build a career in sport; I enjoy it and I can really maximise what I’m doing here. I can go into finance at a later point, but with sport there is only so far your body is going to go.” After crunching the numbers and gaining a sponsorship Marcus took a leap and hired a coach in America. 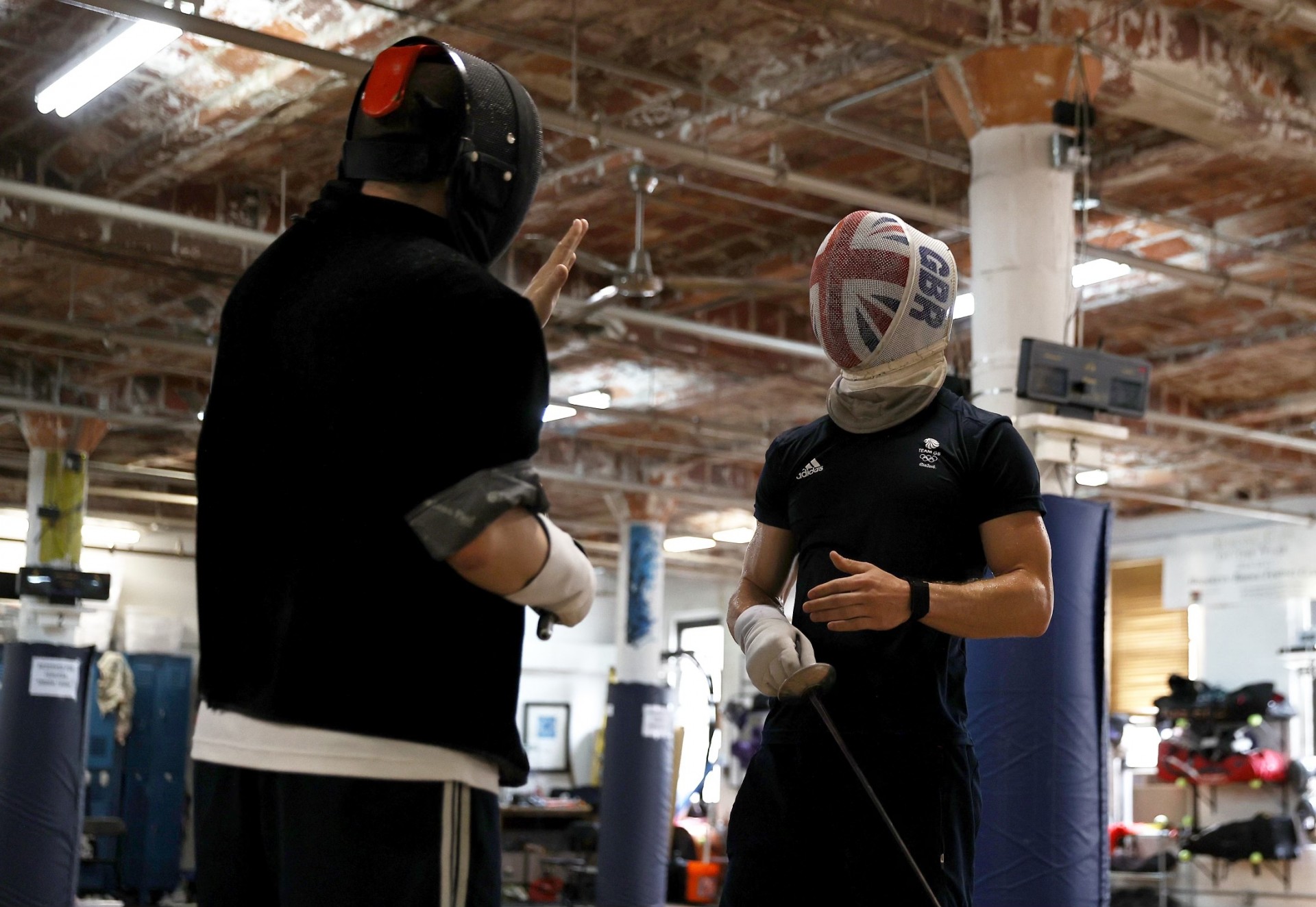 Marcus Hard at work with his coach in America. (Photo by Elsa Garrison)

Marcus had been looking for coaches worldwide, until he finally settled on a coaching team in New York. “I spent some time with a coach out in China, and I was like ‘this is affordable, and I can make this work, but do I have the same connection with the coach [as the one in New York]?’” he said. “I would say the thing I learnt the most [while in New York] was resilience. Getting knocked down and picking yourself up. As an athlete you’re used to that, but in such a short time to be taking hit after hit after hit was a big thing for me to be okay with.” A good couple of years training and performing was halted when the Covid-19 pandemic swept across the world and postponed the Tokyo Olympics until 2021. Many athletes were frustrated as almost 4 years hard work was geared towards this competition; however, Marcus saw it as an opportunity to evaluate where he was, and where he wanted to go. “From a performance point of view, I felt pretty happy from how I was developing everything, so I looked at it from an outside perspective and how I contribute to the sport, how I help the younger generation,” Marcus said. He also made available resources to help people struggling with mental health, as well as stepping up his efforts to become a carbon neutral and climate positive athlete with a charity he works with called Trees For The Future. “There was only so much I could do training wise in my garden, so I put a lot of energy into other stuff, and hopefully these things will stay long after I leave sport.” Differing levels of restrictions have meant that training camps have been placed all over the world, with the last few before heading to the games being in Italy and Spain. “My level is getting better and better, and I feel in a good position for Tokyo,” Marcus said. “As long as I put my best foot forward and keep stepping in the right direction, I’m going to be pretty happy come the 26th of July.” The games kick off on the 23rd of July and the fencing events run on from the 24th of July to the 1st of August. Marcus is competing in the men’s individual foil, which takes place on the 26th of July.