Discipline and responsibility was instilled into Sandhya Balakrishnan from a young age. Her first taekwondo lessons started aged three due to the insistence of her cousin who was a taekwondo coach. Despite early resistance to the lessons, it wasn't until Sandhya attended her first competition, aged seven, and won a gold medal where her feelings towards the sport changed. The rewarding feeling of accomplishment drove her to continue training taekwondo & earn more medals.

Sandhya’s youth was spent going to school, training until 10 pm, going home and repeating this routine five times a week. Sandhya said: “The routine became normal to me. People at school never used to understand me as I had to watch what I’m eating so I can stay in my weight category for taekwondo.”

Sandhya’s second milestone happened when she attended her first national competition aged nine and won another gold medal. When winning the match, Sandhya unknowingly beat a junior Great Britain athlete. Subsequently, she was scouted for Great Britain and in 2014 was selected to go to the Commonwealth Games. Her training for the games was amplified with two months of intensive training and travel to GB’s Taekwondo Headquarters in Manchester from London four times a week. The hard work paid off as she won three fights, winning a bronze medal.

Sandhya always wanted to be the best at everything she does especially taekwondo and in school. She claims: “There was never a specific time when I wanted to do taekwondo at an elite level. I just love the feeling of achievement and it is something that keeps me going. So if I’ve got an opportunity I take it and don’t turn it down.”

She had to take a break from fighting during sixth form to focus on her A-Levels due to travel requirements and a desire for a future in investment banking. Her ambition for investment banking started in secondary school and was piqued in sixth form following work experiences at Blackstone and Rothschild & Co. Sandhya, aged 20, is currently halfway through her degree in economics and economic history at London School of Economics and Political Science (LSE). At LSE, she is the president of the business society choosing the role due to a love of sharing information and motivating people. She is especially passionate about getting women into investment banking by trying to break the barriers of the male-dominated industry.

Along with being president of the business society, being a skilled taekwondo fighter has helped Sandhya stand out in the investment banking field and has noted employers find her martial arts background interesting and unique. She claims taekwondo has helped hone skills that are suitable for the world of work: “I have excellent interpersonal skills, confidence and great resilience. I think this is because in taekwondo you're not always winning competitions and matches. You just have to pick yourself up and work and then try again. I've applied that to everything I do in life.” 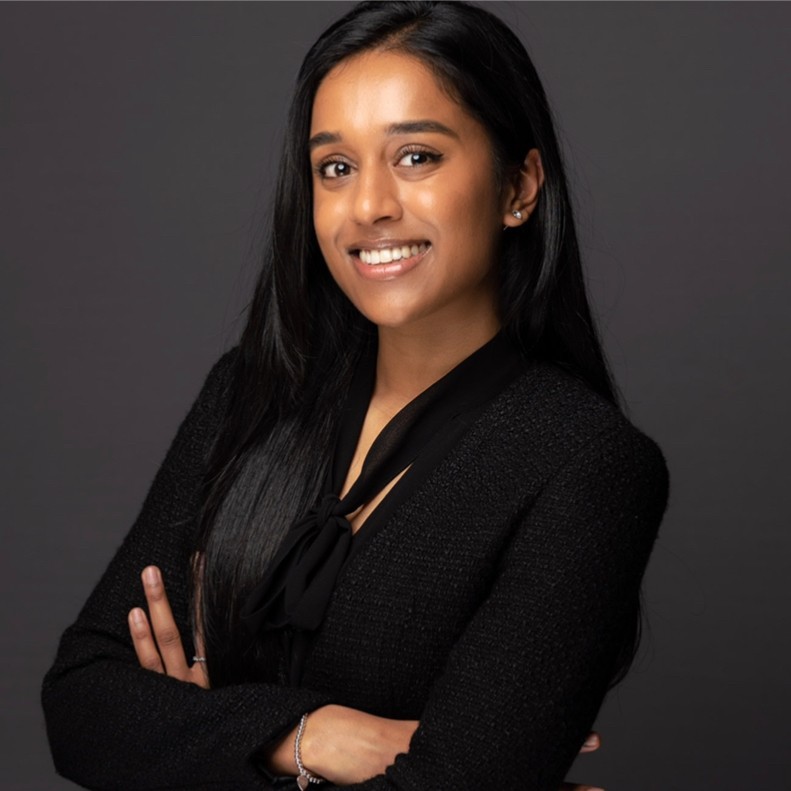 Sandhya has a 1st Dan black belt in taekwondo

Sandhya used add-victor’s services when looking for an internship in investment banking. She was assisted with her CV and applied for roles aided by add-victor. Subsequently, she has secured a summer internship at an independent private investment bank. Sandya was keen to express the importance of gaining experience when attempting to start a career in banking or finance: “Try and gather as much work experience as you can. If you haven't started an extracurricular activity such as a sport or music, try and get signed up. There is still time to develop your skills now. I'm constantly trying to develop mine. Always keep pushing yourself and maintain a positive attitude.”

As aforementioned, Sandhya is passionate about changing the banking industry’s underrepresentation of women and believes changes can be made now: “I think that firms could offer female exclusive programmes to boost the chances of them getting experience or feeling a bit more comfortable. I think if they did this or create an incentive for women and people of colour to join it could make them feel welcome in the firm.”

Sandha’s future goals are to work hard during her summer internship and get it converted into a graduate role. However her sport will remain an important of her life  Sandhya says: “I still want to compete in taekwondo, go back to competitions and get my 2nd Dan black belt. That's my plan but I’m just taking it one day at a time.”

All images were taken from Pexels